We visited Las Vegas for the first time in January 2017.

Although we were staying in one of the “best” hotels on the Strip it is of course a necessity that you visit as many other hotels as possible. Every hotel has a uniqueness and something different to offer.

One of the hotels we visited was The Stratosphere which is slightly further down the strip but thanks to the awesome Lyft we got there in no time.

The hotel itself seemed a little less modern inside than the ones further up the strip but the only reason we went there was because of the main attraction of the hotel – the tower!

The Stratosphere Tower is 1,149 ft (350.2 m) high, the tallest freestanding observation tower in the United States and the second-tallest in the Western Hemisphere.

As well as being able to go to the top of this amazing structure and look across the entirety of Sin City, taking in some stunning views – there are also 3 thrill rides up there. Yes, three white knuckle rides slap bang on the top of this 1,149 ft high structure! You know, just the norm! I’ve enjoyed all these types of rides for years and I’ve loved my trips to EuroDisney,  Alton Towers and any other funfairs to be…fair. Travelling at 113 km/h on a quadruple loop the loop stand up, sit down, lie down rollercoaster or falling from 180 ft at 87 degrees and everything in between – they are all equally as awesome as they are shit your pants scary.

Once we arrived at Stratosphere we were hungry so it was time to eat and if we hadn’t already realised that American portion sizes were huge to the point that the good old “Super Size Me” really needs updated to be “morbidly obese me please” then we were about to have this concept literally rammed down our tiny Scottish throats courtesy of Roxys Diner!

We were possibly a bit late for the breakfast menu but the waitress wasn’t too bothered. It was like stepping back in time to an old American Diner and I did feel like I was in Grease – which trust me, is a good thing as far as I’m concerned.

Greg ordered ‘Roxy’s French Toast Platter’ and I ordered something like ‘Roxy’s Hash a Go Go”. Although it was technically still breakfast time we also got beers too – the saying “oh go on, we’re on vacation” is quite commonplace when deciding what we are ordering from the drinks menu.

The waitress arrived with our two plates and well, fuck me, she must have a second job as Popeye because how she managed to carry these MASSIVE plates at the same time is both a mystery and a huge achievement in my eyes. 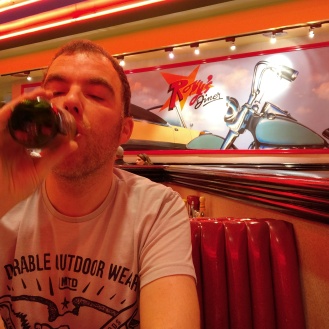 The fact that the food had a knife stabbed through its undead heart was as if it was reading my stomachs mind which at the time was saying something like  “yeah…kill me now!

The waitress obviously realised we weren’t accustomed to these epic sized plates of biblical portions because she removed the desert menus and said “I don’t think you boys will need this after these, will you?” – erm, too bloody right we won’t, Vi!

It was 40 degrees outside and even although there was great air conditioning in the diner I was still sweating like Judas Iscariot if instead of last supper he had a “last breakfast” with Jesus – but I was on a mission to try to finish off my own little son of a bitch!

Did I succeed on my mission which turned out to involve pretty much eating my cat’s weight in breakfast food? Well, I think that Vi’s comment when she returned to clear our table decides that…now go ahead and read this quote in an American accent…

“Wow, well done boys  – I didn’t think you guys would do so good with that!”

To which I replied..

Well, nothing that is, except for flashing a cheeky little smile from under my tomato ketchup covered face. I really wasn’t capable of coherent speech (or reaching for a napkin to clean myself apparently).

We paid the bill and crawled out of the diner. Seriously though if you ever visit this hotel I would definitely recommend eating at this awesome place!

We bought our tickets for all three rides but decided to rest for a while to allow our breakfast to digest before getting in the lift to the top of the Stratosphere. When I say we rested, I of course mean we piled money into the nearest slot machines!

When we did get to the top we looked out at the stunning views from the inside and when we went outside it turned out it was quite wet and windy up there. You might also not be surprised that after seeing my hair in this selfie it was the last selfie of the visit up here!

As well as having lots of other attractions in the tower such as the Sky Jump – which there was no chance in hell I would ever, ever do. However, I did enjoy watching one insane individual while they were preparing to jump and then once they jumped I continued to watch her flying through the air from the safety of a looking at a little television screen.

The three rides on the top are…

I’ve already said previously that I have loved these adrenaline type thrill rides for many years, however, when you see them close up…

…you come to the realisation that these rides were now on top of a 350m high building this results in no normal “light bulb moment”. This results in a…

To put it another way – I was having second thoughts.

Greg was never really too keen in the first instance but he goes along with things to keep me quiet so when he realised  I was teetering on the brink of the thrill ride idea being a good/bad idea I’m sure there was little party for one going on inside him.

My initial analysis of the situation took into consideration things that hadn’t gone so well for these types of rides recently but then again there’s always been that “risk” which is usually fine with me when they are ON THE FUCKING GROUND, you know like at sea level.

If something goes wrong on these particular rides up there on the Stratosphere Tower i.e. I fall out of the little car thing then I don’t just fall a few metres – no I fall 350 of them to my untimely death, spewing out Roxy’s “hash a go-go” as I go go into the desert below!

We walked around the outside at the top for a while taking photos and assessed the whole situation until we reached the queue for Insanity and before we knew it we were part of that queue. There was no turning back now!

There was no turning back that was until one of the operators of the ride announced that the it was closing due to the windy, or as I like to call it  “blowy as fuck” weather conditions.

The decision has been made for me. Re-fucking-sult!

I was relieved on the inside yet on the outside I was showing my big disappointed face cursing the stupid weather for ruining my good time.

We walked around some more before eventually getting in the elevator to go back to a normal level of being above the sea for humans.

In the elevator we struck up a conversation with the attendant and we mentioned how we didn’t get to go on the rides because they had just been closed due to the weather ( insert sad face here ) to which she replied how she had just heard that on her radio…but it was only Insanity that was closed because – the other ones were still open so according to her we should go back up!

It’s probably worth pointing out here that I didn’t actually have a bum bag, fanny pack or call it what you will – it just sounded funny to say this here so went with it.

The attendant either saw the look of panic in my eyes or could sense the feeling of dread in my sphincter because she subsequently said “well…your tickets are open all day so you could come back later in the evening, it’s really cool in the dark with all the lights”.

Oh yeah, that’s a good idea!  It would probably be so much better doing the rides at that time, we’ll come back tonight – thanks!

NOW Listen you here to me bitch tits I plan to spend the evening on a Britney Spears slot machine, getting happily drunk on free drinks supplied by the friendly waitresses in a ground floor casino somewhere so far away from this place that the only way I could possibly get back here before the ticket expired would be in a mother fucking TARDIS!

We were out of the elevator, out of the hotel and out of the white knuckled clutches of the rolly coasty grim reaper quicker than you could say…

Am I disappointed that we didn’t go through with the rides? Yes, perhaps a little…

Will I go decide to actually go through with it when we return to Las Vegas in January 2018? Watch this space!

What about you? Have you been braver than us and successfully been on any of the three rides at the top of the Stratosphere…and more importantly lived to tell the tale?