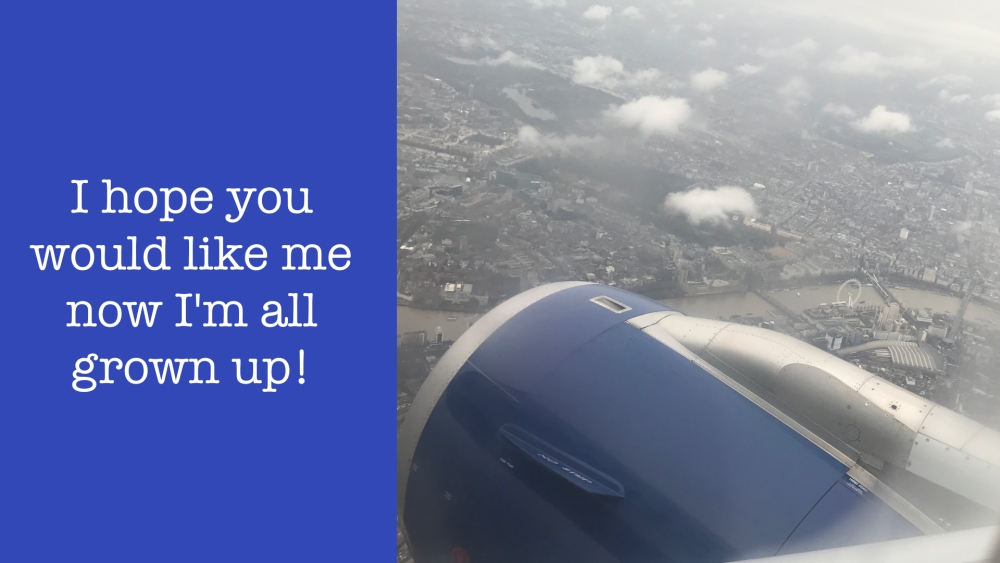 I’m writing this text message on the aeroplane.

I’m not sure why because – one you’re not supposed to text people from planes and two you’ve never owned a mobile phone – you used to struggle to get the video recorder to record all your cowboy movies and war movies for goodness sake.

I don’t know – maybe it’s because I’m not quite on Earth at the moment either that it just seems like a good idea.

Sorry I’ve not been in touch sooner. I’m so bad at keeping in touch – ask Mum! She’s actually got a mobile phone now and I don’t phone or text her as often as I should and that’s not very nice I know. Again, I’m sorry.

I can’t believe it’s been almost 8 years since you left us, Dad.

It does make me feel sad. It also makes me angry. Hopefully it’s obvious why it makes me sad but you’re now wondering why the anger?

There are lots of reasons I’m angry about this!

You didn’t get to know me as an adult. As you know – I left home aged 19 for University and although I still came home during holidays you started getting ill around the time I was graduating.

I’m glad you made it to my graduation. 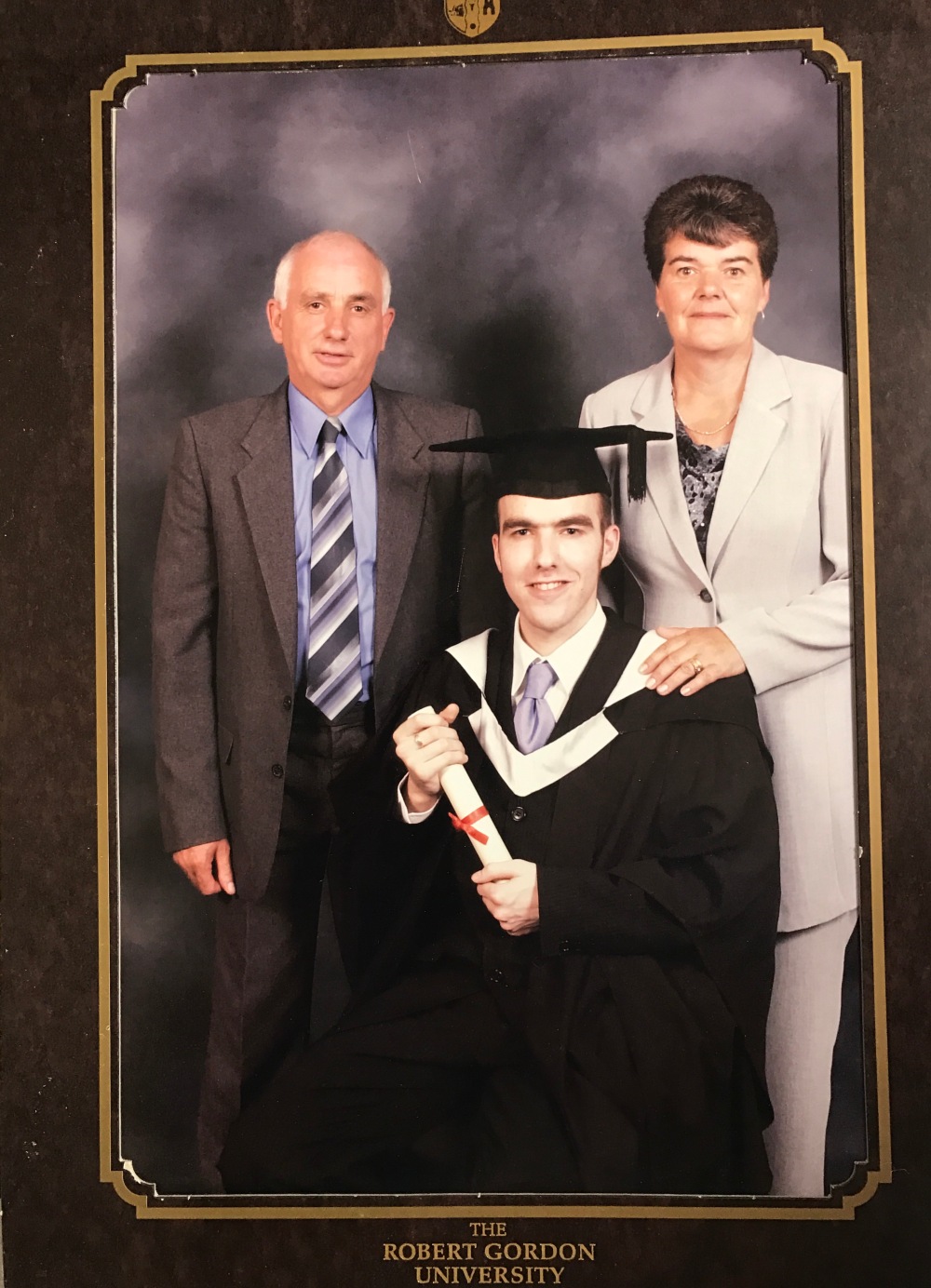 In fact, I wonder if I’m an actual adult now or if I ever will be but that’s another story.

You were still with us until I was 31 but you hadn’t really been ‘with us’ for a long time before that.

I know c**t is a terrible word and I very, very rarely say it. You used to say it all the time so it’s fine, right? It was horrible for everyone who had to watch you go through it. Us ‘watchers’  will never have any idea how it must have been for you but I guess I’ll find out one day, so yeah – thanks for those genes Dad!

That’s only one reason it makes me angry – there are many more. It’s the most selfish reason as it’s about me missing out. So when I then think of what you missed out on I get more angry.

You worked hard every single day of your life and although we were never well off we never went without.

You worked hard every single day of your life to look after us and, I can only assume,  with the thought in the back of your mind of one day retiring, spending days going for long walks, playing bowls, drinking in the pub and enjoying your senior years.

Mum has also missed out on this by proxy and that totally sucks! It would have been your 45th wedding anniversary this year.

I hope you would like me now I’m all grown up!

This photo was the last photo taken of me while you were still with us – just a day or two before. I look at it now and see the sky turning grey as if it knew of the dark days about to come.

I still have lots of memories of you that will never leave me. They do fade and reappear from time to time which is both a pleasant surprise and a sad moment at the same time.

There are too many to talk about here and since it’s a short flight and my phone battery is dwindling I can’t write about them all. You have always had the same memories as me anyway, right. Now, you will remember them again since wherever you are now I’m quite confident dementia isn’t being a c*** to you anymore!

I’ve time to share a few, to make sure you remember. I’m an adult now and I get to make the rules!

These days I’m totally obsessed with the 80s. Everything about them, the music, the TV, the food – the lot. That is largely due to you. As if the 80s weren’t awesome enough you helped to plant my memories of them and now they’ve grown…into an awesome plant…making them seem even better!

An awesome plant, yes, but a slightly less scary version than Audrey 2 from the 80s cult classic ‘Little Shop Of Horrors’.

I remember sitting up next to you in the armchair watching the wrestling on a Saturday afternoon. That same armchair which was part of the three piece suite whose sofa I hid behind while we tried to watch Doctor Who together.

The Fifth Doctor is “my doctor” thanks to you!

When you were made redundant in the 80s you probably didn’t see it as ‘good thing’.

I was so lucky to get to spend all that extra time with you, going for long walks up the glens and around the dams, taking me to the bowling club so you could have a quick pint but still always made sure we were back in time for our dinner – crispy pancakes, chips and spaghetti hoops. Eating from it our laps watching Danger Mouse or Dogtanian on the black and white portable tv.

Nicknames – you had a few for me ranging from the very Scottish ‘the wee yin’ or ‘the bairn’ to animals such as wee pet lamb.

There was one particular nickname you had for me I’ve only come to ‘figure out’ recently. Years went by with me not really thinking too much about what it meant or why you called me it.

You called me ‘little sireco’ and I thought it was some made up name.

We have something called the internet now (don’t worry you wouldn’t be able to use that either) so I Googled this term and Google doing what it does asked me if I meant “Little Sir Echo”?

Maybe I did. Maybe you did…

Who the heck is this “Little Sir Echo” – I needed to know!

The lyrics resonated at me or with me or something…

I think of the type of kid I was and, occasionally, the type of “adult” I am now – I see “me” in the lyrics – I guess you did too.

Thanks for my nickname, Dad!

We’re in a happy place now, aren’t we? Let’s skip across the whole cunty dementia thing that darkened the last few years.

Let’s skip across it in the same way you tried to teach me how to make stones skip across the surface of the River Devon.

No, I still can’t do it but I’ve got a degree in Engineering now and I could probably produce something like this instead so shush!

What else have you missed?

I can drive now can you believe it? You probably only remember me driving you up the wall but I can now drive an actual car! Not up a wall yet but it’s been close and is maybe just a matter of time…

I own my own home and have my own little family now. It’s probably not the family you would have expected me to have but I’m happy and I’m sure for that reason you’d be happy for me too.

You did a good job with me so well done for me!

I’ve visited your grave a few times and you’d be happy with your spot. One of your school pals is right next door to you – that’s pretty cool, right?

I have one regret  though and I’ve never told nobody about this until now.

After you funeral, in the graveyard when you were being planted, I wanted to make sure I was the very last person to have physical contact with you. How? I tried to be sure I was the last person to let go of the cord thing on your coffin after it had been lowered in to the grave. Uncle Ally was taking ages to drop his cord but I was  determined I was going to be last to drop mine…

…sorry, there are actually tears welling in my eyes right now as I write this and I NEVER cry…

I was the last one to hold a cord and then I dropped it. The last person to have physical contact – obviously via coffin and cord etc but it still counts, ok!

So, what is my regret?  Well, as I was about to walk away from the grave I had two Pound coins in my suit pocket and just like I never cry, I never usually carry money.

I really wanted to throw them in the grave with you and say the words ‘have a drink on me, dad’.

I will rectify that now by sending you a couple of quid via ApplePay. What’s ApplePay, you say? It’s how you pay for stuff on your mobile via the inter….oh never mind…just go and have a beer and open a tab, I’ll settle up when I see you next!

The plane is almost landing now but more importantly my battery is at 19% and anything below 20% and something called the panic sweats start to set in.

Let’s end on this…I mentioned the 80s earlier but never discussed the music. Here’s where I could tell you I have a music blog that has lots of 80s themed posts but that would be lost on you like the ApplePay – also 16% and I’m really sweating now.

Let me just quickly talk about pop music from the 80s instead. In particular your favourite band – Dire Straits and one of your favourite songs from them. Until recently if this song ever played on any of my playlists, as soon as I heard the first few notes I had to skip it (I’m so much better at skipping songs than stones). I just couldn’t listen to it.

23 thoughts on “The Text Message That Can Never Be Delivered”