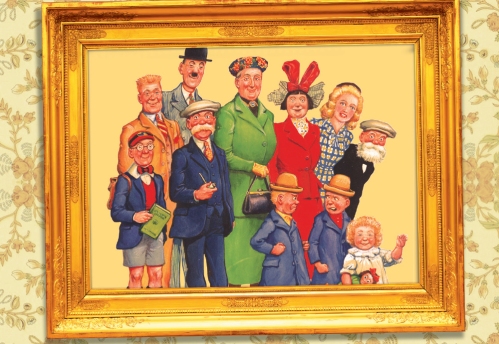 If you ask anybody from Scotland about The Broons they will no doubt reply with something like “Jings, crivvens, help ma boab” or “Granny sookers”. It might not mean anything to non Scottish people but The Broons are a national institution in Scotland.

The Broons is a comic strip following the exploits of The “Broon” family (or Brown to give them their posh name) living in a tenemant flat somewhere in Scotland making their first appearance in March 1936. Appearing as a weekly feature in the Sunday Post newspaper with a full annual released every second year, I’ve pretty much grew up with The Broons.

I remember waiting for my dad to finishing reading the newspaper so I could read their latest story. I remember looking forward to Christmas Day so I could get the annual which I had always finished reading by New Year’s Day.

Although all other comic strips came in colour I loved the fact that The Broons was always in black & white and that’s the way I think it should still be. With Maw, Paw, Gran’Paw, Maggie, Hen, Joe, Daphne, The Twins, Horace and The Bairn – there was a character that everyone could identify with…

Sadly, as I got older I didn’t keep up with The Broons – which I am sure is true for a lot of adults but – dinna fear…

The Broons Live On Stage

Everyone in Scotland now has the chance to see The Broons live on stage thanks to the Sell A Door theatre company.

“Pit the kettle oan mither, this is braw news!” Scotland’s most famous family The Broons are coming to the Theatre Royal! The Glebe Street bunch have featured in the classic DC Thomson comic strips in The Sunday Post since 1936 and this production celebrates them on their 80th anniversary! Award-winning Scottish playwright Rob Drummond brings the infamous characters Granpaw, Paw and Maw Broon, Hen and Joe, Daphne, Maggie, Horace, the Twins and the Bairn to life in a production filled with laughs, love and comic-strip visuals, all set to a Scottish soundtrack. This world first theatrical staging draws inspiration from the famous comic strip to bring you a brand new lively and fast paced tale… Can Maggie really, finally be getting married?! Return to Glebe Street, the But an’ Ben, and of course the Kirk to find out! The marvellous artwork and well observed storylines of The Broons means that everyone recognises a little of themselves in these classic tales. We are thrilled to be honouring these much-loved characters and bringing them to life for a live theatre audience.

If you grew up in Scotland this show is a must so try and get along to one of the dates.

The Broons is currently playing at His Majesty’s Theatre, Aberdeen. Click below to book tickets – you won’t be disappointed!

Have you heard of The Broons? Have you been to the show?  Let me know in the comments below or tweet me @SteveSays2014

One thought on “The Broons Live Stage Show”