After travelling from Aberdeen via Norway and arriving in Stockholm – the next objective was how to get to your hotel quickly, stress-free and as cheap as possible.

If you are staying in central Stockholm, my advice is to take the Arlanda express.

It takes 20 minutes and costs around 300 SEK – which if you use my currency converter logic of dividing everything by 10 to get the equivalent GBP then it’s about £30. You can buy discount tickets for 2 people but be warned the kiosk payment system is quite confusing at first and we ended up buying 2 two-person tickets for just 2 people! Not to worry though because the customer services people were very helpful and soon sorted us out – I think it’s a common mistake.

The train itself is awesome. Really! Coming from the UK I now realise how poor our rail network actually is. The first rail experience in Stockholm courtesy of the Arlanda express showed me cleanliness, high tech/modern interiors, friendly staff and most importantly these days with my iPhone having a shit battery life – a power socket under every arm rest. It was truly eye-opening!

After leaving the train I noticed some other carriages that looked positively office-like with their furniture layouts. Take heed National Rail et al.

From the T Central station it was a short walk to our hotel.

Stockholm has an amazing underground rail network and it’s probably the fastest and most economical way to get around the city. Well, realistically perhaps not as there is a great cycle lane network and there are bikes available to hire so for people who are more adventurous (and fit) than me – you can get on your bike, literally! For the rest of us – the metro works just fine! 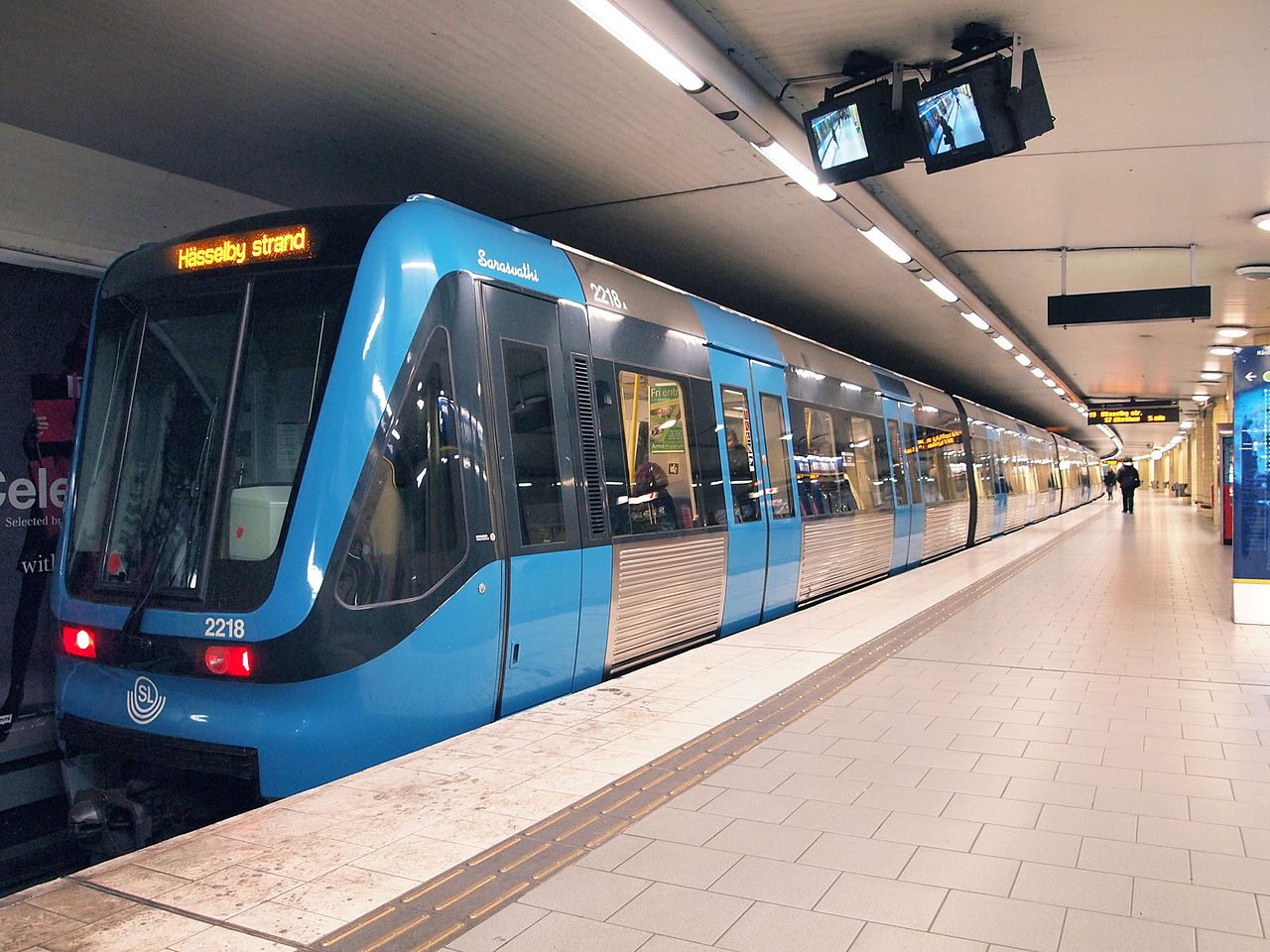 However, as convenient as it may be, don’t let it’s “convenience” fool you. We thought we were quite clever by working out our route including crossover points on the different coloured lines to get to the place we were spending most time but as it turns out we would have actually been quicker/cheaper walking over ground! Oh well, you live you learn.

Don’t get me wrong – this is an amazing network for commuters and if you are using it a lot during your stay I recommend getting an Access card or at least downloading the ticket app on your smart phone.

What struck me about the underground compared to the likes of London was the look and feel when you were underground. There were pieces of artwork everywhere and interesting decor everywhere, the lighting was awesome and it genuinely felt that you were in some “other world”.

It’s not all sweetness and light though because, as is always the case, there is still the occasional nutter! We found this out when set upon by some crazy, screaming old lady shouting something about knives! Through the power of the internet I have discovered she is quite famous around those parts and is referred to as Jesustanten…

The only other mode of transport we used was the “sightseeing” bus and boat, hop on/hop off option. This cost 300 SEK each and, from my experience, was a complete rip off!

Firstly, it’s very confusing as to which bus you can actually “hop on” since there are two companies operating from the same location, offering the same deal and look very similar. We seemed to get snubbed quite badly when trying to board one of the wrong buses!

Secondly, we didn’t actually get to hop on any boat due to the weather or “something” (it was slightly raining and a little bit windy but I can’t see that being an imposing factor).

Finally, it’s confusing as to which attractions along the route you can get into for free – we experienced a saga initially trying to get into Grona Land and after eventually queuing for twenty minutes to get on Tilt ride we were ushered away because it turned out our tickets were for entrance only and you had to pay extra for the rides. So, instead of just allowing us go on the ride after queuing for so long and telling us it would be okay to pay afterwards, the attendant made us turn around and walk back down the queue as if we’d “chickened out” at the last-minute – thanks for that! I was raging to say the least and almost knocked over a man on stilts as I stormed out the park.

All in all we only had a single 5 minute trip on the sightseeing bus – a total waste of money! My advice would be, if it’s not raining and you are able to walk – do that instead since every attraction on the bus tour is within easy walking distance.

As I mentioned earlier, bicycles are a big thing in Stockholm with plenty of opportunities to hire them and there are dedicated cycle lanes throughout the city.

There also seems to be a really good standard (as opposed to the rip off sight-seeing) bus service as well as a tram network.

Bring a pedestrian/tourist walking around the city – well I have to say that I simply loved the pedestrian crossings. Unlike the boring uk ones where it’s just silence followed by a “clinical” beep, beep, beep when it’s time to cross. In Stockholm they have something like a countdown ticker which speeds up and slows down according to whether it’s time to cross or not. It sounded like an Avicii dance track and I was loving this. It then got even better during the Eurovision Final weekend when the music coming from the crossing while you waited to cross was “Euphoria” by Loreen…

..and while you actually crossed over it was “Heroes” by Mans – I was too busy dancing across the street to capture this on video!

In summary, there were many more positives than negatives regarding getting around Stockholm and in my opinion it’s on a totally different level to that of the U.K. but at least now I know what to look forward to and what to avoid for my next visit!

What about you? Have you ever travelled around Stockholm? Let me know about your experience in the comments below or tweet me @stevesays2014

3 thoughts on “Visiting Stockholm: Getting Around”